Do you ever sit and wonder about all the paths you had to go down through in order to reach a certain point, and, if so, do you ever feel the grip of the inevitability that tells you it was bound to happen?

I saw an email on my inbox, months ago, from Ragnar Relay, a race I’ve done once before in which you’re peacefully forced to relay run distances with strangers or friends or both. They planned to record a team of strangers running the Grand Tetons race in July, and make a reality documentary out of it. I thought to myself, well – what are the chances that I’ll actually get picked if I send a video? Here’s to nothing.

Except they liked me and my [embarrassing] introduction video, and they picked me, and in a whirlwind of near-inexplicable events I found myself booking plane tickets out to Utah, and attempting to simulate the near 3,000 foot total climb of the race by running up some hills in Washington, DC. I couldn’t sleep right all last week – a mix of anxiety and excitement and unpredictability preceded my flights out West. Knowing I was about to spend a whole long weekend camping with 7 complete strangers as a camera crew recorded our attempts to run up a near 10,000′ mountain and gain a view of the Grand Tetons themselves, I couldn’t focus as the day grew near. Would we get along? How would we deal with our different running paces and styles? Would there be awkward silences in between polite conversations?

Writing this now, I laugh at the absurdity of such worries – the past 80ish hours are now ranked somewhere up high in the list of best memories I have. It only took an hour, maybe two, for the atmosphere in the tent to be that of a group of like-minded adventurers ready to get to it – after all, you have to be a certain type of person to go on an overnight race with a bunch of people you don’t know. I had only seen these people’s pictures, and yet I felt like I knew them a bit, too, simply because they were there. We were all there.

And so was the camera crew recording our very first interactions.

The first night in Alta, Wyoming brought the temperature down with it, casting our tents in shadows from the flashlights and campfires. I walked out of our tent, and I looked up, and a billion stars greeted me. The sky that night looked like a dome, fiercely dark and punctuated with bright stars that promised a fair day tomorrow. It was hard to look away.

A cold morning enveloped us soon as we got ready to send off our first runner at 7:30 AM, officially starting team Real World-ish on our 128-mile adventure around the Grand Targhee Ski Resort. Team races like this bring a different kind of stomach butterflies in – there’s anticipation, excitement, a need to prove yourself to your team, the feeling of camaraderie as you cheer them on louder than any other team around you. As runner number 6 out of 8, I anxiously went on about my day between the running village and camping tents until my time to start off with the worst one – the red loop. 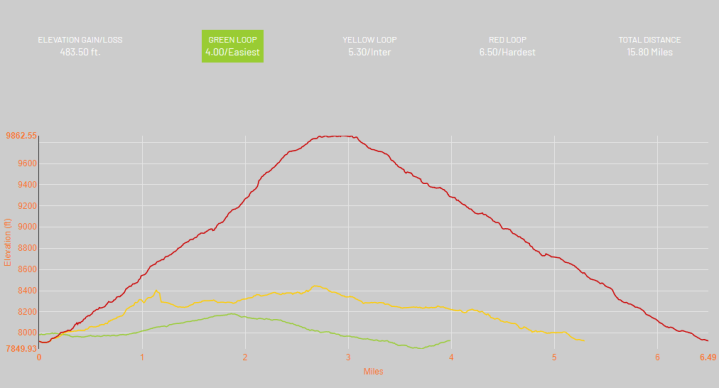 My heart was beating outside of my chest the whole time – as someone who was born, grew up in and currently lives at sea level, the prospect of being at such a high altitude seemed daunting but distant, as if knowing that it would be tough didn’t quite register as such. In reality, it was sort of ridiculous – even walking around the campsite at roughly 8,000′ could get me out of breath and the whole weekend it was like my lungs were at 40% capacity. Adding that on to the gnarly 3-mile trek to the top of the mountain, my one goal going into that loop was this: getting through it. No matter how long it took me, I owed it to my team to bring the bib up there on my turn. And – I don’t say this lightly – it was probably one of the hardest runs I’ve ever done.

Step after step, on the way up, I kept reminding myself why I was there in the first place: to challenge myself. To live a life worthy of my privileges and good luck, which enable me to push out of my comfort zone and focus on my dreams rather than my basic needs. To prove that I could. For the views. For my team. For the little girl in me who never in her wildest dreams thought she could climb a mountain. And I kept repeating my typical pep talk phrases: you don’t stop until you’re done. All it takes is all you got. Say hi to the pain, and put it in your pocket. Just keep running.

As I reached the top of the mountain, my team was waiting there, shooting some footage for the documentary – and it was their support alone that made me not stop right there and then, lungs burning and legs numb. Their presence, and the view behind them, opened up my frown into a huge smile, goofy with accomplishment and awe and wonder. I felt empowered. I felt like I could do it all over again. So after pictures, after hugs, after high-fives with strangers and having a bucket of Gatorade lifted up to my face, I raced back down the mountain. I couldn’t wait to be able to stop and process what had just taken place.

When one of the camera crew caught me at the end of this run passing the team bib to another runner, he asked me how it was, and I immediately started crying. I was humbled and privileged, sore and out of breath. Disbelief, the emotion of that moment is. The world is so beautiful, and these days we mostly see it through our screens. Me, who always has words at the ready and loves to use them abundantly, was speechless; the only thing I could do to describe what just happened was cry, because of the sheer beauty and the sadness that it was the first time in my life I had seen something like it.

With the prospect of the most difficult run behind my back rather than looming in front of my eyes, my focus turned laser-sharp. I wanted to be a vessel of energy for my teammates, a learner of the art of running all day and night, and several times that day I caught myself wondering if in fact this was all real. The village was bustling with life, sweaty runners mingling with event staff and comfortable-looking family members, and through shared meals and sitting and resting time I got to know each of the people I was sharing this experience with. From Alaska to New Jersey, from middle-school teachers to dancers, I was surrounded by these people who kept making me laugh and open my mouth in admiration. They kept crushing run after run, even through injuries, even through pain, making sure the next person up was awake and ready – sleep is rare to come by during races like this and must be treated with caution. However, we had each other, and everyone could close their eyes in complete confidence that they wouldn’t be allowed to stay behind.

Soon, the sun set, and out with the flashlights we went, braving the woods of Wyoming amidst the bear and moose warnings in the area. The sky that night was gloomy, cloudy, enveloped in gray wisps that turned the dark darker. I set off at 2 AM, bear spray in hand and heart pounding against my throat, and through the winding switchbacks of the yellow loop I slowly let my ears become part of the forest, eagerly listening. Was that a bear? Small animal? Is someone behind me? It’s incredible what the mind does when one can’t really see more than a couple feet in front of them. To my surprise, though, I settled into a pace. I quieted down, and calmed down. Though still panting from the elevation + exhaustion combo, it was more in sync with my steps and the trees became friends, rather than scary shadows. I laughed to myself, then: perspective. That’s all it ever takes.

I finally curled up into my tent after the second run, eager to get some rest before the early morning and end of our official race. Sleep came easily, but so did waking up: this was it, the last of our runs. That’s always a bittersweet moment; seeing the finish line means that you’ll be done soon, but it also means that you won’t be running and pushing anymore – it is the frontier between idleness and movement. Race command had us double up for our last 6 legs, which meant that I got to run the shorter, easier green loop with one of my brand new favorite people. We talked and danced through those four miles, shared secrets and worries, and then, when we passed our tent on our way to the finish line, we grabbed beers that we cracked open as we finished our run and officially ended our portion of the race. Pure bliss, the finish line is. Happiness and giddiness, the official cover-ups of the soreness and blisters and pain, took over. They were still there hours later, when the 8 of us crossed the finish line for the first and last time all together, as a team. We had done it. We had run 128 miles.

And then we celebrated as if we had known each other our whole lives.

As I sat there on the soft grass, under the Saturday morning post-race sun, sipping on orange juice from a plastic Mimosa cup, I stared at the lush green mountains in front of me and just smiled. I let the quick memories of the weekend replay in my head, let myself smell the dewy grass and crisp mountain air. Sitting together by the fire for hours, talking. Creating stupid little nicknames and jokes. Cheering on all the other runners I saw. While the race itself happened, it was a little harder to stop and marvel at the fact that every single thing had gone extraordinarily well. I felt rich beyond measure.

Ralph Waldo Emerson once wrote: ‘Every person I meet is my master in some point, and in that I learn of him.’ Each runner I met this past weekend made me want to run a little faster, be a better friend, love my family a little more, talk to strangers a little more – the camera crew feel like friends, and I can’t wait to see what they do with all the special moments they captured these past few days.

Though I’ve gained much more than I expected this weekend, I also feel the longing of someone who just lost something, who knows it may be years before I see all of those people again. Who knows that nothing will ever quite be like walking into that glamping tent, exchanging introductions, attentively examining how each one of them interacted with another and with myself. So I wrote this down, and took some pictures, so I can relive this crazy event whenever I miss it a little extra. Cheers to you, Real World-ish. It was a great one. 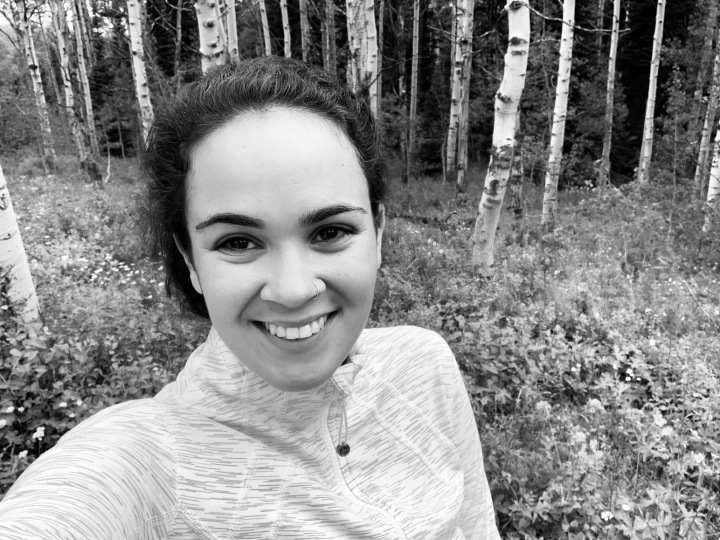